The calla lilies are in bloom again 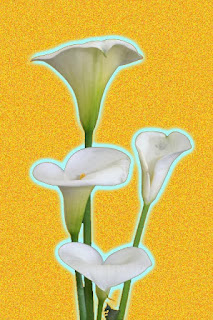 The calla lilies are in bloom again. Such a strange flower—suitable to any occasion. I carried them on my wedding day, and now I place them here in memory of something that has died.
~ Katharine Hepburn, Stage Door

When you recite that first sentence DO remember to say it with great weariness and pronounce the last word a-gān not agĕn. Loooooooooong a.

Stage Door was one of Kevin’s fave movies. What’s it about? The short version is:

It’s far deeper though, illustrating the opportunity chasm between the haves and have way fucking less's. 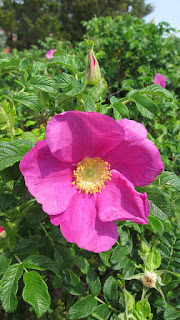 Katherine Hepburn’s character, Terry, has big Broadway stage dreams. She’s from a wealthy Midwest family and could, most def, afford a Big Apple apartment all her own. Daddy would totes spring for it. Instead she moves into the crowded Footlights Club, a boarding house for unmonied aspiring gypsies – actresses and hoofers looking to make their big breaks. 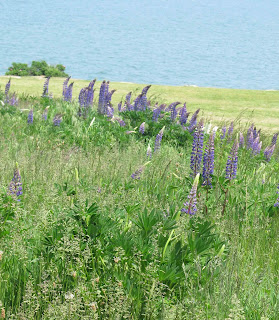 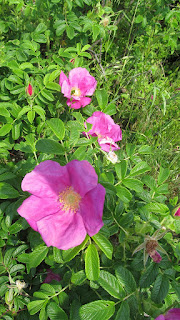 Why? It's that pesky, romantic notion of starving, struggling, hopeful artists thrown together, all helping one another.

In hopes that she'll fail and sour on the Broadway dream, Terry’s daddy buys her the lead in a new play by a big name producer. Hilarity does NOT ensue.

Why’s this come up? Yesterday, while I was rambling around Nut Island, I noticed that the beach roses are in bloom a-GAIN.

In the jumbled attic of my brain this brought Kay to mind.

Like Terry, Kay seemed to have a starry-eyed idea of what being a poor starving artist type actually entails. She had discovered the wonders of mud and fancied herself a creative clay crafter. Despite being from a one percenter wealthy family, she had studio space at the same, very small, clay collective as me.

She always made a big, showy thing of competing with another art potter who, not born in a money patch, supported herself through her sales. On each Open Studio sale day Kay would tot up the day's receipts and crow loudly, if she was ahead, as though this was all nothing more than fun, good natured competition. As though paying the rent and buying food weren't on the line. Well, for her, they weren't.

Kay was not blessed with self or social awareness.

I never really understood why she didn't set up a brill studio in one of her homes (either the one in a fashionable Boston neighborhood or her mondo spread down in Truro). Was she with us for the technical tips and advice from fellow craftspersons? She could get those at any of the bazillion, expensive workshops that she regularly took part in. Maybe she needed to have status within a group. You know, the big fish/small pond thing. Who knows?

Unlike Terry, I don't think Kay ever learned how offensive and obnoxious her behavior was.