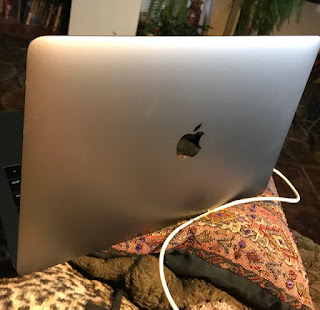 I went down to the Apple store at the mall and bought a new laptop. Ten, Jen and I went first thing yesterday morning. Ya know, before the joint got mega crowded with people and kiddles who could bump and knock me over.

It was an exhausting experience. TOTALLY! But it's done. The woman helping us, Zam, was awesome+, a real star and a half. I spent more than I'd hoped to (no, I'm not surprised, just feeling the pain of it) but what I've got now is molto fab – a little smaller, a lot stronger, more capacity AND it's significantly lighter.

I'm now attempting to, within my emails, find and recreate some of my work files. I'm guessing that IT dude will NOT be able to recover any of my old stuff – designworks OR personal. This is both suck-ass wretched and not so bad. YES, I've lost a shit-ton of fab photos, doodles, fonts and logo files for work BUT I can take more pics (and assuredly will) and I can request and/or create vector versions of the logos with which I most often design.

So, the end result of my heinous coffee spill is that I have a clean and substantially better computer. I've turned over a new tech leaf too. I fully intend to label/name ALL my pics when I'm downloading them, not later (which I did but only sporadically). I'm also, on the suggestion of pal Jenny out in Phoenix, using a travel mug versus my usual cup. This makes SO much damn sense!


And she thought then how strange it was that disaster – the sort of disaster that drained the blood from your body and took the air out of your lungs and hit you again and again in the face – could be at times, such a thing of beauty.
~ Anita Shreve, The Pilot's Wife
Posted by Donna at 7:06 AM