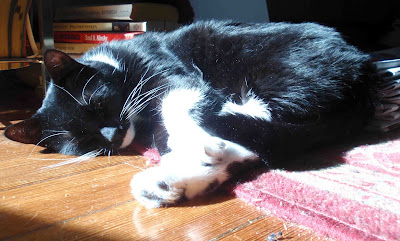 I’ll bet the Orange Menace sleeps like a well fed cat in a cozy spot of afternoon sun. Ya know, deep and untroubled. More likely though, it’s the sleep of the perennially, hopelessly braindead.

Last night, I just could NOT drift off to FairyLand. I did deep breathing and other relaxation exercises but my efforts proved tragically futile. I got up, did some design/layout work, read, visited Shoutyface and came upon a couple Jim Wright posts which, I suspected would ensure I’d never, in this lifetime, find my way to Nod. I read them anyway, like a kid who can't stop watching horror movies at bedtime. DOH!

Twitler, just in case you missed the broadcast, is criminally merciless, indifferent and barbarically malignant. I’m being kind though.

A clear conscience is the sure sign of a bad memory.
~ Mark Twain

I do not believe anyone can be perfectly well, who has a brain and a heart.
~ Henry Wadsworth Longfellow

This means, of course, that Trump and his Republican party are in perfect health OR they’re Cylons. Seems obvs, don’cha think?

The ultimate test of man's conscience may be his willingness to sacrifice something today for future generations whose words of thanks will not be heard.
~ Gaylord Nelson

The rapacious goat fuckers of the GOP – conscience-free AND they're decidedly not forward thinkers. It’s all about RIGHT now. Wait, does this make Trump and his Republicans live-in-the-moment Zen Buddhist types? Nah. Goat fuckers – every last one.

I will not let anyone walk through my mind with their dirty feet.
~ Mahatma Gandhi

Ah, if only it was so simple. The Greed Gang just bangs in without knocking and OOF such filthy feet!

We have been to the moon, we have charted the depths of the ocean and the heart of the atom, but we have a fear of looking inward to ourselves because we sense that is where all the contradictions flow together.
~ Terence McKenna

Truth! Honestly, steadily gazing at our motivations, foibles and such can be horrifying. I imagine this is why von Clownstick has never, ever done it.

We are all wired into a survival trip now.
~ Hunter S. Thompson

It doesn't matter what you think about consciousness, higher truths, or different dimensions - it's what you do and what you are that counts.
~ Belsebuub

I've known a few pretty talkers in my day. I always want to tell them "walk it, don't (just) talk it" why haven't I? Eh, I figure these sweet-epiphany spewing wordsmiths are too much in love with their big enlightened brains and the sound of their voices. They're burbling siren songs to listening questing souls – girls and boys not so cynical as yurs truly. Why stomp on someone's sweet sex-magic call with my peasant punk crows of "oh puh-leeze brother, it's getting deep and whiffy in here.”

There is a self-destructive program running in the consciousness of humanity, and we must write a new program.
~ Bryant McGill