Is that an eggplant in your pocket or are you just happy to see me? 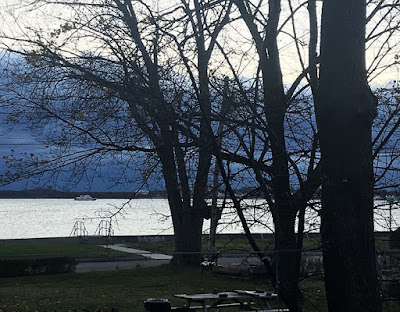 Ten and I took a little drive on Thursday (yes, OF COURSE we were headed to yet another pot shop). The trees are NEARLY all naked now. For the most part, foliage is a thing of the past . Sure, sure there are those coy trees who hold onto their dead leaves like bubble dancers holding out for more tips. But even they’re few and far between now. 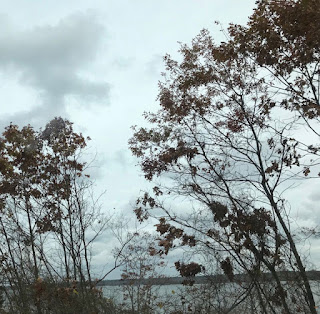 Yes this is most assuredly the cold, homely season. Ah, but we live on a beautiful bay and the water’s always fascinatingly alluring. Also too, in four months it'll be SPRING.

I had an appointment with the neuro–ophthalmologist who took over when the saintly Simmons Lessell took the last train for the coast. I won’t go off about the sub par replacement more than I already have – I just don’t see the point of these annual appointments. His lacking-mondo-experience baby docs do all the serious examining. He waltzes in (with a bevy of med students – it gets crowded in there), scans the baby doc's notes, takes a fast look-see and then shakes my hand, saying “it all looks good.” He pronounces everything”good” even when not – my poor cornea will attest to that. So I gotta hope the baby oph was a mega observant prodigy.

Yesterday’s baby doc most def failed to impress. He needed a serious goose to get the CART set up (usually that’s already in and up), instead asking me “you read lips though, right?” I wanted to scream, FER FUCK’S SAKE, this is Mass Eye and EAR and you’re a doctor (albeit a baby doc) and you don’t understand the dealio on lipreading?

I allowed that lipreading wasn’t his get out jail free card (communication-wise) and tried to give him a short version of how lipreading works (and doesn’t – especially not in intense, serious medical exams). He cut me off and went to get the CART set up. Apparently I was his first deaf patient – I really do hate to break cherries.

One thing that the main neuro-oph did was breeze through my latest MRIs (on the computer’s screen). He didn’t stop to explain anything unless I asked specific direct questions like, what’s that shadow at the front of my head (a meningioma) and how close is it to my eye (not).

On one of my brain views, it appeared as though one of my meningioma clan had grown to eggplant size. Not one of those cute little Italian eggplants either – this sucker’d been on serious growth hormones. I was stunned AND didn’t have confidence that this doc could or would explain anything to me.

Possibly, I’m not toting a steroidal aubergine around in ma tête and it just looked that way on the 2D view. But maybe I do and that would explain all the annoying symptoms I’ve been having.

I see Plokin on Thursday. I’ll get the 411 then. My goal between now and Thursday? Calm. I see loads of yoga breathing on my Day-Planner.

I should’ve asked for the notes on yesterday’s appointment so I could study them for myself. After three hours of dilated pupils with bright lights beamed in and annoying docs, I was kinda beat.
Posted by Donna at 8:58 AM