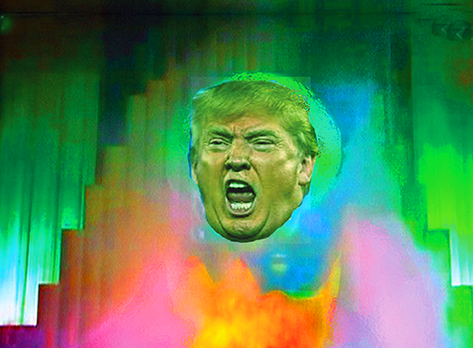 Not enough for President Spineless Treasonweasel to terrorize and torture the families of immigrants, he’s now moved on to betraying our allies, the Kurds.

They were fierce, effective fighters in the war against the Islamic State  – they paid in blood, fer Bast' sake. That, by the by is not a war that’s over and done no matter what Prez Shit for Brains says. Hells bells, even Lindsey Graham, who’s been sucking miniature mushroom wang since McCain croaked, knows that!

You know this…how? We’re all aware that you don’t read and barely listen. So I’m figuring you pulled this outta that capacious ass of yours. Ya know, same place you get the rest of your lies and delusions. WWII ended 74 years ago. 74! Live in the NOW, Weaselbean! Also too, that’d be an astoundingly petty point IF it weren’t so blindingly disingenuous.

Oh and Fuckface von Stupid also doesn’t understand that his little saber rattling tweet is nothing but hilarious.


if Turkey does anything that I, in my great and unmatched wisdom, consider to be off limits, I will totally destroy and obliterate the Economy of Turkey (I’ve done before!).

What…once he’s done destroying the US economy, he’s gonna move on. He'll become president of Turkey and wipe out theirs? Also, “I’ve done before” – no man, c’mon…you know that ONLY happens in your bath-time fapping sessions – not in real life.

”great and unmatched wisdom?” Dude, you have GOT to come to grips with the fact that you're NOT fooling anyone with this ridiculous, laughable (IF you weren’t the prez) big guy talk – least of all your autocrat crushes.

Erdoğan, like every other damned dictator and aspiring dicktator, has your number. They ALL know you’ve got little boy crushes and raging hard ons for them all. The only people you’re snowing are the stupendously dimbulbed rubes. They’ll buy it but then, they believe Santa and his eight tiny reindeer are real.

While reading, I found an interesting connection.


Kurds have struggled to maintain their identity, often being referred to as "Mountain Turks" in Turkey, where they were forbidden to wear traditional Kurdish outfits or speak their language. They continue to face discrimination and policies of persecution. (source)


Families were often forced to send their children to these schools, where they were forbidden to speak their Native languages.
~~~
Indian boarding schools were founded to eliminate traditional American Indian ways of life and replace them with mainstream American culture.
~~~
The children were forced to cut their hair and give up their traditional clothing.

Trump and Erdoğan can dish about this on their next date. OOOO, look at all the torture and abuse we have in common!
Posted by Donna at 10:29 AM