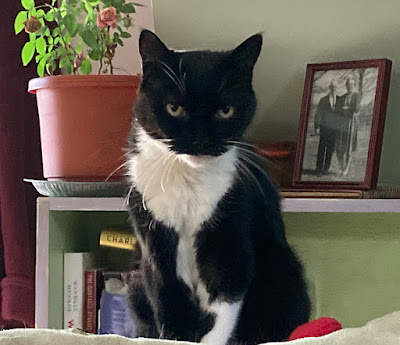 I've won the Most Boring Human on the Planet award. Yes, that's me. A day when I:

Before and after Jen does the work thing, we sit in my boudoir watching Coco's antics. She's an old kitten (15 or 16?) but still full of exuberant trixiness. What other excitement do I engage in? I've been watching Ten rebuild the porch stairs (pics when I can climb down them), taking my thousand and one daily meds and putting an effort forth to NOT overdo my exercises...I mentioned that already, didn't I?

I can't stand long enough to paint BUT I can peruse the art and architecture sites, like Colossal, My Modern Met, Amazing Architecture, Whitehot Magazine and more.

I've been looking up the origins of various phrases such as, sweating like a pig. Did you know? Pigs don't have sweat glands!

The term is actually derived from the iron smelting process in which hot iron poured on sand cools and solidifies with the pieces resembling a sow and piglets. Hence "pig iron". As the iron cools, the surrounding air reaches its dew point, and beads of moisture form on the surface of the "pigs". "Sweating like a pig" indicates that the "pig" (ie iron) has cooled enough to be safely handled. (source)

This phrase originated in the USA in the 1800s. It refers to a practice where people who were looking for a physical fight would place a chip of wood on their shoulders, challenging others to knock it off. (source)

And barking up the wrong tree:

barking up the wrong tree' dates back to early 1800s America, when hunting with packs of dogs was very popular. The term was used literally at first, when wily prey animals such as raccoons would trick dogs into believing they were up a certain tree when in fact they had escaped. (source)