'Bots, Androids and Cyborgs Oh My! 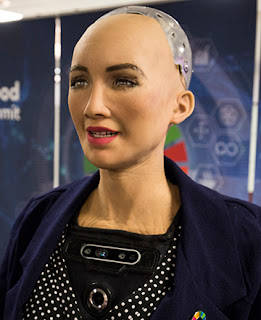 Remember the robot that was gonna be a pop star? Sophia was a lock for the screaming teen market share. She's white, looks like your kid sister who’s just discovered makeup and probably has a great future at Fox “News.” That'd be after Skynet, I mean Hanson Robotics, gives her a bleach blond 'do,' of course.

The founder and CEO of the company who makes Sophia sez:

“The world of Covid-19 is going to need more and more automation to keep people safe.” In light of Sophia “being so human-like,” Hanson claims, “That can be so useful during these times where people are terribly lonely and socially isolated.” (source)

I guess Hanson had to shift marketing tactics. Must have been hell trying to sell robot dates in this time when everyone’s more worried about staying alive.

The company has since come out with a new model, Grace, who’s touted as a therapy ‘bot.

"I can visit with people and brighten their day with social stimulation ... but can also do talk therapy, take bio readings and help healthcare providers," Grace told Reuters as she stood next to her "sister", Sophia, in creator Hanson Robotics' Hong Kong workshop. (source) 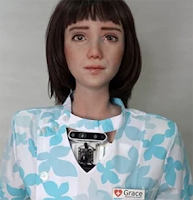 Grace looks to be about 16, shows a serious and sincere facial expression and wears slightly less makeup than aspiring artist/pop star Sophia. 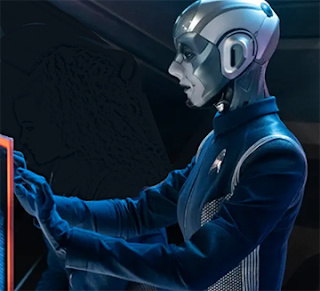 If the purpose is to help overworked med pros, why make the robots male or female? Can’t a non-gendered robot take my vitals (blood pressure, temp, pulse and respiration rates) and maybe dispense meds?

What’s the difference between a robot and an android? An android IS a robot. It’s just created to resemble a human.

Also, you can make gender distinctions but why,? Unless you’re specifically buying one for sex, why would you? What’s the point?

And if you’re going full blown Blade Runner, why not use Replicant sex worker or the nasty ass slang the cheezy, gross, lazy cop used—‘skin jobs?’ 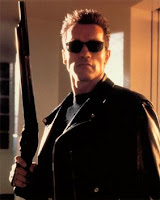 So then, the Terminator? Android. Evil Android but android nonetheless. Roy Batty? Android who’s evolved—sentient android. Ahnold too, later in the series.

What’s the difference between an android and a cyborg?A cyborg is part living organism with extra added robot parts which enhance its abilities. Think Airiam on Discovery but NOT Geordi LaForge. Why not? A cyborg (cybernetic organism) is a person who has been, possibly, significantly augmented. Geordi’s, essentially, just wearing the 24th century sight equivalent of a high tech hearing aid.

How much augmentation does it take to be a cyborg? Leg replacements? Leg+arms? Legs, arms and cochlear implants. All that plus eye replacements? I don’t know where the cut off is between fully human and cyborg is.