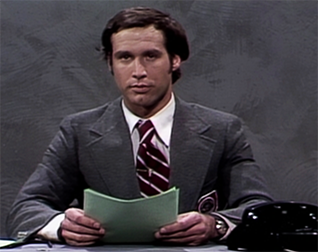 I never got why this was a thing on SNL. I wasn’t a big newsreader in 1975—too busy surviving the slings and arrows of high school and shit. So ‘scuse me for not understanding the deal until now but still totally enjoying Chevy Chase’s skit.

OK, I was aware that Franco was evil; notorious for the imprisonment, torture and killings of those who spoke out against his regime (I’ll bet, in addition to Hitler, he was one of the former guy’s heroes). I was unaware, however, of Franco's lingering march toward death. I was also ignorant of Nixon’s praise of him and that he tried to manipulate Franco's successor, Juan Carlos. That Nixon dude, what a charmer.

Why’s this come up this morning? Ten and I were talking—Live Transcribe (on our Chrome tablet) was doing its transcription thing. It mistranslated something or other as 'Franco' and, well, you know my mind—instantly Generalísimo Francisco Franco is still dead came to mind.

Of bloody course, I had to dive down the rabbit hole to fill in the embarrassing gaps in my knowledge.

Adolf Hitler met Franco in Hendaye, France (23 October 1940), to discuss Spanish entry on the side of the Axis, Franco's demands (Gibraltar, French North Africa, etc.) proved too much and no agreement was reached (Hitler remarked that he'd rather "have two or three teeth pulled out" before trying to negotiate Franco's entry into the war again). (source)

That was interesting! Imagine out-assholing Hitler. By the by, the whole column, the source from which this snippet was taken, is fascinating. Go. Read!

One of Franco’s famed remarks:

"Our regime is based on bayonets and blood, not on hypocritical elections."

Can you just hear TFG fapping now? I think I can and //shudder// I’m scarred for life.
Posted by Donna at 7:40 AM