I blame The Who. Okay, not them but the people in charge at Cincinnati’s Riverfront Coliseum in 1979.

I blame the "security" staff in a Chicago club:

A tragedy unfolded at the E2 (Epitome) nightclub in the early morning hours of Feb. 17, 2003, when patrons fleeing pepper spray released by a security guard to break up a fight rushed down nearby stairs. Twenty-one people were killed in the stampede in one of Chicago's deadliest club disasters. (source)

Last year there was the Astroworld Festival stampede Houston where nine concertgoers between the ages of 14 and 27 were killed and many others were injured during the opening night of the festival on November 5. (source) 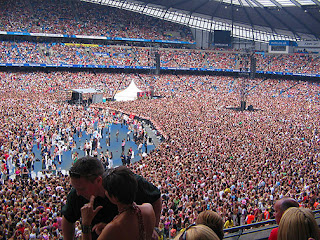 Mind you, I’ve been to a couple stadium shows.

The first was in ’74 when I saw Earth, Wind and Fire at Three Rivers Stadium in Pittsburgh. It was an all day festival sort of a thing and pretty mellow. There were a bunch of other bands—Doobie Brothers, Chicago, I forget who else. Concertgoers came and went—it never felt oppressively jammed. I was even able to get down onto the field and close up when Earth, Wind and Fire took the stage.

The second was when I saw Pink Floyd. This was 1994, well past their peak and deep into nostalgia tour time. They were playing at some gigantic football stadium south of Boston. I liked Pink Floyd BUT, had I known our seats would be on the tippy top row of the stands and well beyond the 50 yard line, I never would have shelled out my hard earned shekels for the ticket. Overall, the performance was old and tired (the inflatable pig? C’mon, NOT interesting or incisive anymore). The crowd was oppressive but not scary (as long as I stayed in my seat).

Why did I go? A friend had tickets and was really excited. We’d gone to a lot of shows together and I thought it’d be fun. I was wrong.

I was at one utterly, wickedly jam-packed show at a small club which, with a sliver of bad luck, could have turned deadly. You couldn’t have slid a thin sheet of A4 between any of us in the audience. It was alright though, I wasn’t freaking. Why not? The band was killer transporting (and yes, I forget who was playing—they had a kick-ass horn section though. The psychedelic funk was strong with them), and we were all dancing as one. More, we were undulating as a single being. There was NO room to cut a rug…pogo maybe but that was AOK.

That’s my one good crowd experience. Well, I did enjoy watching mosh pits…from a distance.

Email ThisBlogThis!Share to TwitterShare to FacebookShare to Pinterest
Labels: Music