On the way in to Mass Eye and Ear for yesterday’s barium swallow test, I realized that I’ve never had an alternate name for Jen. Bob was TAB (The Amazing Bob…duh). The name that appears on Ten’s drivers license is Thomas. Oni is Rob. WHY, oh fucking why, does Jen not have an AKA?

I came up with one—Sparkle Butt. Is that not absolute perfection?! Yes, yes it is.

Now then, the swallow test went tremendously well but the best part was when they gave Jen (AKA Sparkle Butt) a subtly shimmery, twinkling lead apron to wear while I was being beamed full of all those yummy electromagnetic radiation beams.

I had a creeping fear that the docs/techs were gonna snake some camera tube down my throat (why? It was, short of being trapped in an MRI tube, the scariest thing I could imagine and I DO have quite the imagination). Nope. Didn’t happen. I just had to sip some barium 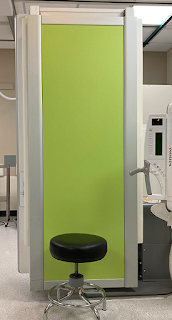 laced liquid, slurp a bit of barium pudding and eat a tiny shortbread cookie topped with barium sauce while they took x-rays.

Before all this (and after they explained what the test would consist of), the doc/tech asked if I had any questions. My only one? I allowed that in my ceramic chemistry days barium carbonate was a big Danger, Will Robinson, Danger and that we had worked on replacing that in all glaze recipes—so, would the barium they were using be evil and radically unhealthy for me. No. They were using barium sulfate versus carbonate and in such a small amount that, at most, it might make my poops a little white (yes, I checked this morning. There were no white frosted turds—OK, I didn't do a deep search but, at a quick glance...nope).

Okay then, bring on the pudding! Even before that though, when Jen and I first walked into the test room, we found a giant neon green TARDIS! Okay, no. This was not the time/space machine that Doctor Who travels around in (and didn't really look much like one either BUT it's what came to mind). This was a big-ass x-ray type set up. Still very cool.

By the by, TARDIS stands for Time and Relative Dimension in Space (you’re welcome).

Let’s get back to nicknames, alternate monikers and other random nom de guerres. I don’t have one. Dammit, I’m 63 years old and I’ve only got one motherfucking name! NOT fair. I mean, Jen is the short form on Jennifer, Rob and Bob are short for Robert, Tom=Thomas. What can you do with Donna? (great, NOW for no discernible reason, THIS song is in my head ) One friend calls me D. That’s cool—I like that. That’s just one person though.

Hmmph. This all just comes back to me having always found my name unimaginative and dead BORING. My parents should’ve named me Reptilicus—Tilly for short. That’s a handle that would’ve given me a damn fine start in Catholic school. Those nuns would NEVER have fucked with a child named Reptilicus!