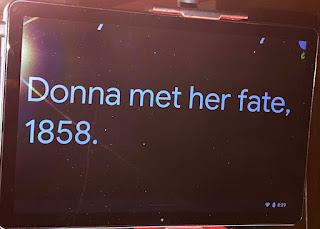 Communication in the hospital and Rehab is difficult for those of us with non-functioning ears. Yes, by law, accommodations are required but in realityville they seldom are.

That is, I can ask a nurse or aide to write shit down—the vast majority will. There's always a scumbag who finds that FAR too difficult though. To make shit easier, what Ten did prior to this stay was this—he bought a cheap tablet and downloaded Live Transcribe. This is a generally brill and mostly accurate app that works on all non-Mac platforms. Yeah, I can't download it to my phone or laptop.

The tablet was big enough for me to see from a relative distance and accurate enough for me to, at least, get the gist of what docs, nurses and aides were saying. Set on a side table, I could read what was said and, if an error in translation happened (these are fairly obvious), I was able to fill in the blanks or, at least, understand enough to ask questions. Did you mean this or this. The app is mistranslating, can you repeat and qualify?

The awesome folk at Spaulding went one step further in accommodation city. They got an IV pole, affixed a bracket in which they inserted the tablet. This meant that the PTs and OTs could take the magic translation devise with us when we went into the hall or down to the gym for exercise.

Sometimes the mistranslations were pretty amusingly off. Most times they were dead on accurate or close enough. Also, my trusty machine picked up a fair amount of interesting crosstalk—nearby conversation and such. Once again, amusement ensued.