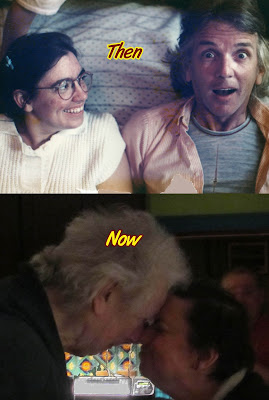 Last year on our anniversary, The Amazing Bob and I were hunkered down at MGH in the midst of an all-travel-verboten blizzard-a-thon. Yes indeedy, we do know how to celebrate. This year, today, will be WAY more low key.

By the by, this is our 30th anniversary. Can you believe that shit? Yeah, us neither.

What’s the secret of such a long happy union?
Em….beats the fuck outta me.

We've joked that O. Henry wrote The Gift of the Magi about us. All I have to add to that is...yup.

What do we fight about? Eh, we don’t—that’s such a buzz kill and why would we even want to slaughter a perfectly sweet, innocent buzz? How about, what do we disagree on? The number of cats we can have living indoors. He wanted just one. I wanted a thousand. We compromised. Two.

There’s probably something else but I just can’t bring anything to mind.

Today's major league jubilation action will involve running errands, hitting the book/music store and then to Froggies for lunch. This evening we’ll have dinner with the kids (i.e., Jen and Oni).