Have you tried NOT being a Nazi? 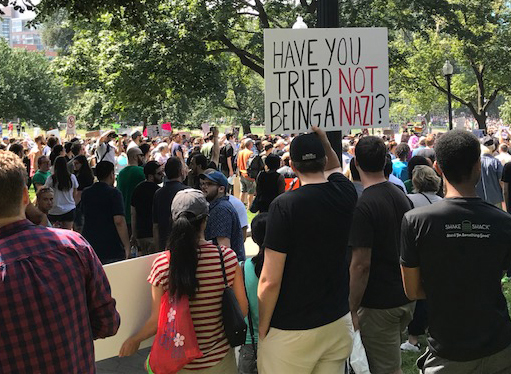 At right, one of the great signs from yesterday’s counter-protest. 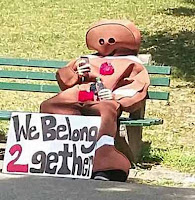 The march from Roxbury to the Common, all on its own, has been estimated at 15,000. Dunno how many of us were already there, up at the State House rally. I’m guessing, all together, we were 20,000 strong (though a few sites are saying there were 40,000 of us). I saw just as many olds (even older than yurs truly!) as youngs and the crowd was more racially diverse than I’ve seen here before. One friend allowed that she saw witches, burlesque nuns, two Captain Americas and this gingerbread man (below right) too.  There was a sweet, happy party feel in the air.

Supposedly the Orwellian named “Free Speech” Rally folks expected 1,000 to attend (though their permit allowed for 100 only). Even if 1,000 dared to show their mugs, they'd have been hopelessly outnumbered. The police had set up a wide no-go area between us and the Parkman Bandstand where the tiny dicked, afraid-of-Browns-Jews-and-*GASP*-feminists hater group was to meet. A very good plan. 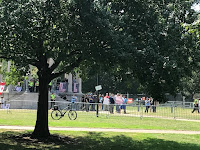 Jen and I got up to the separating fence so we could have a good look at the filth. Ya know, like a zoo for the horribly mentally malformed. There were more cops out to protect the Right Wing douches than broken brained, douches in attendance. 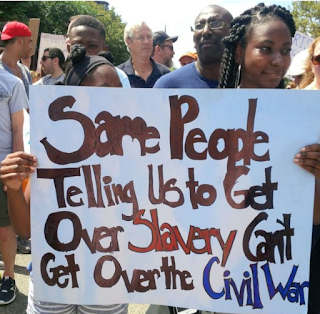 One of the planned speakers of a conservative activist rally, that appeared to end shortly after it began on Saturday, has said the event “fell apart.”

Dozens of rallygoers (plural is generous – if there were 12 of them, including the speakers, I'd be surprised) gathered on Boston Common, but then left less than an hour after the event was getting under way. (source)

It’s been a lot of years since Boston was Heinous Bigotry City. This failed rally of racist shitstains and our mondo, jubilant counter-protest underscores that.


The “Boston Free Speech” group, meanwhile, asked on its Facebook page for donations to purchase an audio system for the event. A link to its fundraising website showed just two people had made donations totaling $9. The page was later taken down. (source)

Everyone we saw was not only well behaved but smiling and happy as though this was a big gathering of the Love-Your-Neighbor Tribe. That’s how it felt too – like a warm, glee parade and party. Jen and I – voyeurs at heart – were, mostly, kicked back in the shade, people watching our mellow hearts out.

Before the "Free Speech" Rally was to kick off, before we all went down to the fences at the DMZ, a few decidedly odd ducks appeared in our area. There were two fellows wearing camo. Who, the fuck, wears camo? It's a fashion statement rocked by the White, Het, Christianist God/American flag/gun humping/war cosplaying crowd. There was an older man in a bright red MAGA hat and matching red T and, then, two skanky dudes whose sartorial statement was straight out of Meth Labs and Truck Stops Illustrated. It was hilarious. Seriously. It was clear, to me, that this was their big brave act of the day – they'd "snuck" into enemy territory to scope things out and, ya know, confirm their prejudices. I'm sure they saw whatever fantastical bacchanalia they wanted. 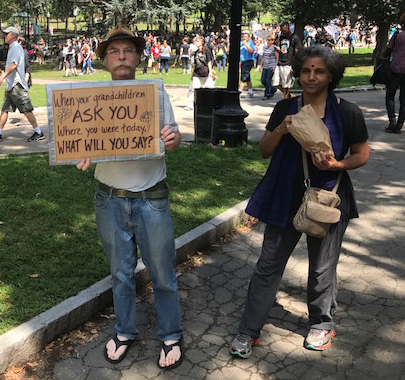 According to news reports there were, of course, pockets of asswipes in bloom. We Lefties are on the side of truth, justice and the kumbaya way but, given the heavily flawed human factor, the brain scrambled shitheels amongst us are gonna inappropriately and counterproductively shit.


TV cameras showed a group of boisterous counter-protesters on the Common chasing a man with a Trump campaign banner and cap, shouting and swearing at him. But other counter-protesters intervened and helped the man safely over a fence into the area where the conservative rally was to be staged. Black-clad counter-protesters also grabbed an American flag out of an elderly woman’s hands, and she stumbled and fell to the ground. (source) 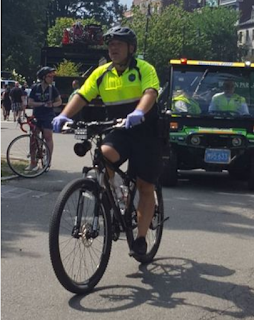 Cretins were DEF a miniscule minority but still – fuckers.


Evans (Boston Police Commissioner) didn’t attribute the bad behavior to rally-goers or counter-protesters, but rather a third group.

“Obviously I wish the troublemakers stayed away,” he said. “ … They weren’t here for either side. They were here just to cause problems.”

Evans said, “99.9 percent of people here were for the right reasons, and that’s to fight bigotry and hate.” (source)

The police were fab – handled everything wonderfully.

Most folks carried signs appropriate to the day’s theme but of course the Unicorn Brigade types, who are so certain that the rest of us are pathetic ill informed dimbulbs who NEED to be schooled, were out too. Yeah, there was even someone wearing a V for Vendetta mask.  Oh, PUH-LEEZE! Another player from the this-is-why-we-can’t-have-nice-things Purity Posse.

Jen and I couldn’t get shots of all the wonderful signs. I saw a great many which simply read, Black Lives Matter – held by black and white people both. Also: 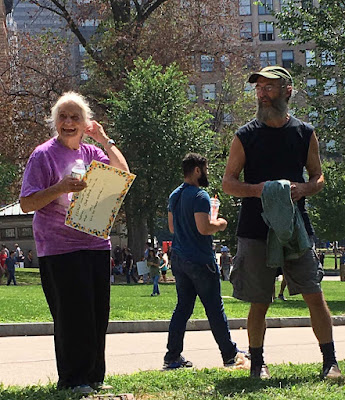 Another Old White Bald Guy for Peace (held by, of course, an old, bald white guy).

No Trump, No Hate, No KKK

Boston Does Not Hate

No One is Free if Some are Oppressed

Nazis and KKK are Snowflake losers

Stop Pretending Your Racism is Patriotism


Another fave, below, reads: Nazis go home – unless you live near here, then, please, go further 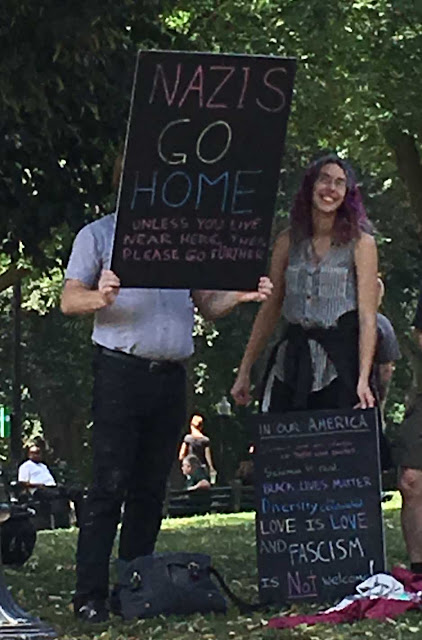 Email ThisBlogThis!Share to TwitterShare to FacebookShare to Pinterest
Labels: Democracy