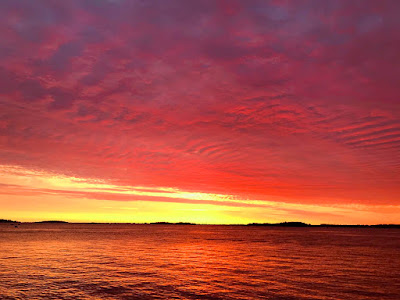 A) Looting isn’t protesting. Looting during protests can be due to many things – check out this excellent post at the Atlantic Monthly – but it ain’t the same as peaceful protesting. DON’T confuse or conflate the two!

An excerpt from that Atlantic article:


Some looters, meanwhile, aren’t affiliated with protesters’ causes at all. Instead, they seize the moment to cause chaos and destruction. This might be what’s happening in videos where white people can be seen knocking out windows and ransacking businesses.

B) As of yesterday more than 100 attendees of the Sturgis Motorcycle Rally have tested positive for COVID-19.

And how many innocent people did they infect with Trump’s Plague once they got home?

Here, in Shit Has Hit the Fanville 15 people, so far (Oni, Jen's other co-workers, their families and tech workers who came in to work on the machines), have tested positive for Plague45. How many people were in contact with the infected, contagious workers and family members before Taint Man became symptomatic and confessed?

This is all goin' down because one rat-licker (the company’s owner actually) just HAD to go to a big indoor party in New Hampshire and NOT quarantine or bother to get tested on his return to Massachusetts.

Dipshit Dude isn’t a completely asymptomatic carrier anymore BUT his case is especially mild (unlike the maladies he inflicted on his very own wife and kids). Amongst other uttered idiocies, he was stunned that children could get it AND he said he didn’t really think COVID was that big of a deal since he didn’t know anyone who’d had it. He did, however. A long term employee’s father DIED from it. He knew this.

One employee, the production manager – who also didn’t take COVID seriously, had the notoriously unreliable rapid response test. It came back “negative.” So now, it’s just the Trumplican company owner and PM attempting to do the work of 12 and, I hear tell, they’re doing it quite badly.

The Board of Health is all over Typhoid Ted's callous, stupid ass now which is great. His response was not gratitude for the how-to-clean-up-the-shitpool-I've-created-and-save-my-biz info but to kvetch “someone musta dropped a dime on me.”

Jesus Dude, what are you? Some two bit crack dealer? He’s so drunk on 45's COVID lies that he doesn’t understand contact tracing.

One worker has already quit – how many will follow. I’m betting on most. I wouldn’t be surprised if this hack brained, fuckwadian excuse for a biz owner gets hit with a class action suit for, at the damn least, endangering the lives of all his employees, their families and friends.

I have never killed a man, but I have read many obituaries with a lot of pleasure.
~ Clarence Darrow
Posted by Donna at 9:10 AM